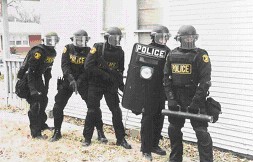 The Quincy Police Department's Emergency Response Team or ERT Unit is the department's special weapons and tactics team that is ready and available to respond to a number of incidents. Formed in 1984, the Emergency Response Team has received regular and ongoing training from both military providers, as well as private instructions to yield a corps of highly committed and talented individuals to meet the growing need for a tactical response.

The Emergency Response Team continues to be a valued corps of officers who have demonstrated capability that has won the respect of other federal, state and local law enforcement agencies with whom they have been in contact.