On the cold evening of February 11, 1925, a fire broke out at a residence on Chestnut Street between 5th and 6th streets. That night was a particularly bitter cold one and the streets and roofs were covered with a heavy layer of ice. In the course of battling this house fire, Firefighter Bradney had ascended a ladder and was climbing to the roof which was also covered with ice. He slipped and fell to the ground, suffering serious internal abdominal injuries.

Samuel was taken to St. Mary’s Hospital where he remained for some time. He eventually came home but his injuries prevented him from returning to his duty as a firefighter. He was placed on the pension list. He seemed to improve but was troubled anew by his injuries and was admitted to the hospital again. He recovered somewhat and returned home once more.

Not quite two years later he went to the Mayo Clinic in Rochester, Minnesota. While under observation there, blood clots formed in his left leg. These clots were determined to have been the result of his abdominal injuries and an emergency operation was performed to remove them. It was the first operation of its kind known to medical science of the time and it saved his leg from amputation. Due to the uniqueness of this operation, Samuel was presented in a case study in front of 1,000 physicians and surgeons from all over the country.

Months later Samuel returned to Quincy but was stricken with abdominal trouble. He was hospitalized at St. Mary’s but gradually weakened until he breathed his last the evening of Friday, November 11, 1927.

He had been a 14-year veteran of the fire department and served as driver of the horse-drawn apparatus of Company #7, located near 6th and Cherry Street. He was 56 years old and was preceded in death by his wife. He was survived by two daughters and five sons. 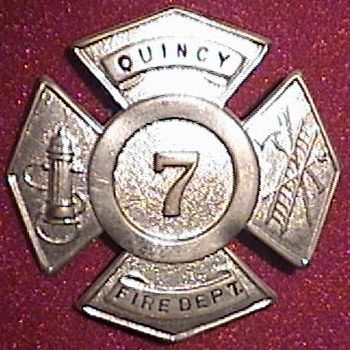