Ernest Yost was born September 26, 1884. He worked on the Quincy Fire Department as the driver of the No. 8 chemical truck.

On March 6, 1929, at 4:48 in the afternoon, an alarm sounded for a fire at a residence at 2017 Oak Street. Companies from Engine Houses 2, 4 and 8 responded to this alarm. Fire Chief Edward Yates also responded in the department’s Buick coupe. Engine House #8 was located just south of State Street on 18th. This was the building that would later become home to Tri-Township Fire Department. The #8 chemical truck, driven by Ernie Yost, left the station and was headed north on 18th Street. Chief Yates was headed east on Broadway. Both vehicles reached the intersection of 18th and Broadway at the same time. Even though the colliding vehicles were not traveling faster than 30 miles per hour, neither had time to apply the brakes. The Chief’s coupe hit the chemical truck broadside with such force that it skidded on two wheels and came to rest on its right side against a telephone pole. Firefighter Yost was thrown from the truck. He was taken to St. Mary’s Hospital and operated on, but died a short time later from his internal injuries. Four other members of the department, including Chief Yates, were injured in the accident.

Firefighter Yost was 44 years old and had recently been elected the treasurer of Quincy Firefighters Union Local 63. 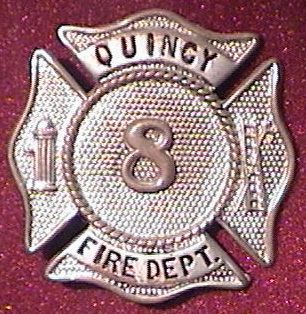