Bernard Kuhlman, who was often called “Ben,” was born in Quincy on September 30, 1880. He lived in Quincy his whole life. He was an iron molder by trade until being appointed to the Quincy Fire Department. Ben was the assistant driver for Company #6, which at the time was located at 17th and Broadway.

Ben’s brother Joseph was a firefighter in Chicago at that time and his brother George would, several years later, become a firefighter for the City of Quincy. His granddaughter, Marcia Kuhlman Cray, would be born many years later and it is because of her efforts that we have much historical information on the Quincy Fire Department today.

On Monday, July 23, 1917 just after two in the afternoon, a Ford motor car backfired and caught fire at 12th and Broadway. Engine Company #6 responded to the general alarm. When the crew arrived, Firefighter Kuhlman grabbed a fire extinguisher and headed toward the car. When he was within three feet of the vehicle, its gas tank exploded, covering him with flaming gasoline, burning him severely and causing internal injuries from the heat and toxic vapors he inhaled. He was taken to St. Mary’s Hospital. For two days Ben Kuhlman was attended to, but the burns he received were too severe. On July 25, 1917, he succumbed to his injuries. During his funeral ceremony, the bells of all the fire stations tolled in tribute to him.

Ben was 36 years old and had been a member of the fire department for two-and-a-half years. He was survived by his wife Emma and five children, ages 5 to 12. 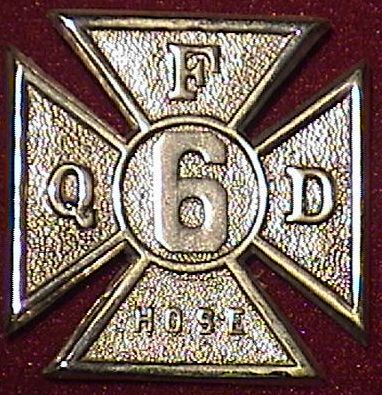