The History of Baldwin Field

Why it's Baldwin Field . . .
by Amber Threet

Thomas S. Baldwin was born between 1856 and 1861, the son of Jane Elizabeth and Samuel Yates Baldwin. Thomas lived in Quincy as a boy; his parents died during his early teens. When Thomas was fourteen, he began selling newspapers during the day and working as a street lamplighter at night so that he would support himself. In Baldwin's later teens, he found a job working the circus. 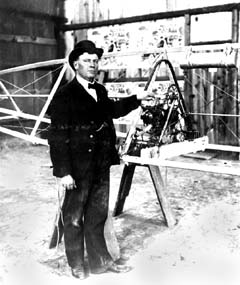 Baldwin was hurt once while performing for the circus. After he recovered, the circus asked him to make a parachute jump from a balloon, which he agreed to do in 1887. This act lasted a few months, then Baldwin returned to Quincy to begin building his own balloon and parachute. Within a few weeks, he had finished his own balloon which was 90 feet high, 120 feet in circumference, and its total volume was 40,000 cubic feet. On Monday, July 4, 1887, Baldwin jumped his way to fame during a Fourth of July celebration. His act was wonderfully popular, and he started to tour the country with it.

During the winter of 1887, Baldwin married Caroline Pool. His interest in the sky began turning to airplanes, and Baldwin started working for the Curtis Project, building practical airplanes in 1909. In 1910, Baldwin completed his first airplane "Red Devil", and he was issued Aviator License #7. Although Baldwin went on building "Red Devil II", and "Red Devil III", he never learned to fly his planes very well.

In his later years Baldwin served in the Army Aviation section of the Signal Corps, as captain in 1917 and major in 1918. Later, Baldwin was transferred to Akron, Ohio as chief of the balloon inspector team before his retirement. Baldwin continued to work in aviation until his death. Thomas J. Baldwin died on May 17, 1923, and was buried with full military honors at Arlington National Cemetery. As you see, Thomas Baldwin was a very important man and accomplished many great things during his lifetime.